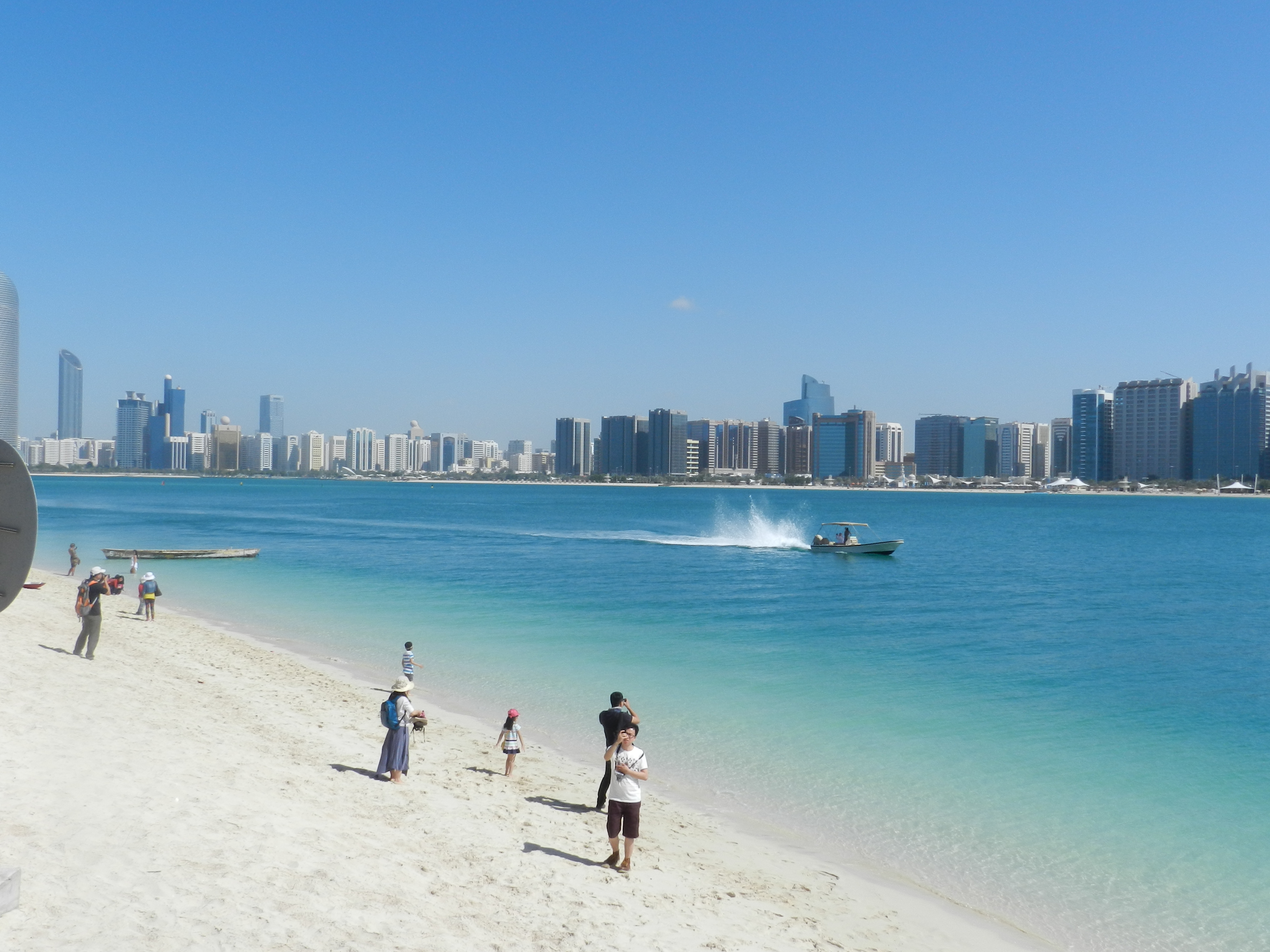 The Emirati nationals are mostly Bedouins moved from Yemen and settled in the banks of Arabian Gulf. Abu Dhabi city is a planned city built during the 80’s, started its developments when oil money started coming the country. The city of Abu Dhabi once was called a “city of millionaires”. The Capital of Emirate of Abu Dhabi is Abu Dhabi city, which is an Island professionally landscaped with beautiful boulevards, well maintained green gardens and skyscrapers. The emirate of Abu Dhabi has a population of approximately 3 million people – that includes nationals and foreign residents. The arrival of the new millennium Abu Dhabi invested for the modification of the Emirates and built many world-famous tourist attractions by investing billions of dollars and made Abu Dhabi a destination. The construction of Sheikh Zayed grand mosque in memory of the father nation obtained the fame as the world’s most beautiful mosque. The Ferrari world with its completions attained many titles.

What are the major tourist attractions in Abu Dhabi ?

There is a long list of Tourist Attractions in Abu Dhabi, we are listing top 10 tourist attraction.

1. The City of Abu Dhabi

Abu Dhabi is the capital of United Arab Emirates and the Emirates of Abu Dhabi. It is a planned city built to accommodate 800 thousand people during the early 80’s – the city grown up and it’s beautified at its peak. The city is oil trader’s hub for the middle east. There some views are unique in Abu Dhabi as one side of the city of Abu Dhabi is occupied by beautiful and unparalleled by any other palace on earth. The presidential palace is the only and only palace this is so lavishly built all the latest architectures and technology. Check out Abu Dhabi sightseeing tour.

The Abu Dhabi Corniche and Heritage village are either side of the breakwaters of Abu Dhabi. The Abu Dhabi Heritage Village is an exhibition of Bedouins life during the pre-oil period. The whole village is well preserved and maintained for the tourist. This is one of the most visited tourist attractions in Abu Dhabi. The Government of Abu Dhabi through the Abu Dhabi municipality built beautiful green garden all around the Corniche.  The Abu Dhabi corniche is surrounded by the whole city start from the presidential palace extended up to sights of the lush green mangroves. The 8 Kms long corniches was renovated in the 2002 and again 2010 built parks and children playground.  The corniches consist of a cycle track and jogging track.

The corniche was used as beach during the 70’s once the beautification of the city of Abu Dhabi was started the beaches merged with concrete wall then built the city of Abu Dhabi.  Until early 90 there were many cargo wooden boats, dhows of the fisher man and pearl hunters parked. The construction of the Mina Zayed port and market built slowly all the boats and dhow moved to the new port.

The Heritage village - The whole village is well preserved property with pride for the tourist. This is one the most visited tourist attractions in Abu Dhabi.

The Heritage villages and the whole area preserved, and you will be able to see a whole city in it. It is a museum of UAE history and Heritage.  The Bedouin village still maintain the bazaar types of shopping where you can by handicrafts and local dresses.  The area is so big one side you see the “Falaj system” of irrigation. The Falaj in Arabic is “angel” has an myth with King Solomon and God’s blessing of breaking the rocks and water falls started. The water at the heritage village irrigation is fetched with bullock which is the ancient way of irrigation.

There is a handi craft centre inside the heritage village where the crafters make the traditional glass and handicraft in your presence, so the tourist can gain information. You will be able to see a some photo of the father of the nation – late Sheikh Zayed Al Nahyan.  Gaze at the Bedouin houses and its large fence and the tradition of keeping the women away from the visitors etc.

If you are interested to know culture and heritage of Bedouins one should visit the heritage village.

The Sheikh Zayed Grand mosque of Abu Dhabi is the vision of the father and founder of UAE, Late His Highness Sheikh Zayed Al Nahyan is exemplary creation of modern contemporary architecture. The Grand Mosque is one of the largest mosques in the world features 82 domes, reflective pools, 1000 pillars, 24-carat-gold glided chandeliers and the world's largest hand-knotted carpet. Here you can visualize a symphony of colors and shades and is a must-to-do attraction in Abu Dhabi.

The most beautiful mosques ever built on earth is the Sheikh Zayed Grand mosque, it took many years to complete the mosque. The mosque is built around 20 kms way from city of Abu Dhabi facing the highway to Al Ain and Dubai highways.  The mosque is built in memory of the father of the nation late sheikh Zayed Al Nahyan that cost millions of US dollars. The architect who designed the mosque never expected that the monument brings so much fame. The mosque receives at least 20 to 30 thousand visitors every day. In United Arab Emirates the Islamic mosques are not opened for the non-Muslims, however at the Grand mosque doors are open for every people different faith. The Grand mosque visit is not a pilgrimage, whereas to see the middle eastern architectural talent and of 1000 workers who worked for years to complete the interior and its manuscript.

The Grand mosque carpet hold the Guinness book of worlds records as the largest hand-made carpet. There are chandeliers in the mosque dome are made with solid crystal, rare stone etc believed to one of the most attracted view of the mosque.

The grand mosque timing for the tourist visit will be between 9 AM to 17.30 hrs however Friday visit are not entertained however limited tour operators.

What is the dress code for the mosque?  There is separate dress code for men and women. The mosque authorities are extremely strict the mosque dress code, and the authorise may turn will not allow you to visit finally landing at the expensive shopping mall to 3 to 4 times and you go to compromise on the quality. One must cover the body up to toe & wrist – head scarf is a must and no transparent or tight dress allowed.

You will not have hazel to locate the mosque, get appointment with appropriate dress code, if you book the tour with ABC Tours Dubai they arrange your visit and offer you a complete tour of Abu Dhabi

The resplendent palace located in the heart of Abu Dhabi city overlooking the shores of the Arabian Gulf, with its own private beach is an ultimate luxury. The stunning display of architecture and Arabian inspired interior décor, Emirates Palace offers a breath-taking experience of authentic local culture, culinary feasts, legendary dining, luxury accommodation and soothing relaxation. You need to pre-book an afternoon tea package, meals to attain entry to the palace

The Presidential Palace is a unique and surprisingly new attraction in Abu Dhabi. It is awe-inspiring to tour the beautiful palace which will give you an insight into local culture and Emirati governance. The exhibits at the various zones of the Qasr Al Watan gives immense understanding of the Arab civilization. The entry ticket to the Qasr Al Watan gives you access to the Palace, the Gardens, Visitor Centre and all zones, exhibitions and public spaces.

Yas Island is one greatest hospitality investment of Abu Dhabi by the developer Aldar properties – it is a cluster some of the leading investment agencies such as Mubadala developers, Abu Dhabi investment, Abu Dhabi tourism development and public as it is a public listed company. The Yas island used to be a part of mainland with arrival of Marina they made canal all around the island to sperate from the mainland.

The idea of developing the Yas Island was to make a hub of tourist and hospitality industry in the emirate of Abu Dhabi. There is a list of tourist activities you can do it Yas island all those activities are world class. The marina circuit one of the major ones – where you can try your skill on various racing cars. The Yas marina world another world class water theme park and Warner bros, Yas links, shopping facilities and major hotels.

Abu Dhabi’s newest added waterfront leisure attraction at The Ritz-Carlton Abu Dhabi, Grand Canal. Widespread over 20,000 square metres, The Venetian village is inspired by the Renaissance and urban planning of Venice architecture and cobblestone streets. The Venetian village, Abu Dhabi is a tourist hub and features a diverse mix of dining outlets from around the world. A vibrant yet relaxed town both day and night.

The first ever branded Ferrari theme park in the world, the Ferrari world features endless fun for both young and the old. The top attraction at the Ferrari world is the “Formula Rossa” –which is the world’s fastest rollercoaster with a speed of 0 to 240 km/h in 4.9 seconds and heart-racing heights of 52 metres. With wide variety of rides, attractions, shows, shopping and dining the Ferrari World Abu Dhabi is indeed one of the best attractions in Abu Dhabi.

The Louvre museum is located on Saadiyat Island, an upcoming tourist destination in Abu Dhabi. The Louvre Museum was born because of an intergovernmental agreement between UAE and France The Louvre Abu Dhabi is the first universal museum in the Arab world. The Louvre Abu Dhabi showcases both ancient and contemporary works of art, history, culture, and civilisations from around the world. Masdar city Abu Dhabi

A unique planned city project, and one of the world's most sustainable urban communities, a low-carbon development. Combined with state-of-the-art technology the city aims to zero waste and sustaining the environment. The planned eco-city is a combination of ancient Arabic architectural techniques with modern technology. The wind tunnels make it easy to stroll around even at scorching heat.